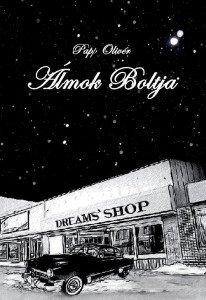 „(…) Now too, he sits by the window, and stares stiffly into the dark night. A little later he gets up, waddles out into the hall. He groans as he takes off the small coat from the rack. His hands tremle as he gets dressed.  He opens the ddor, with the walking stick in his left hand, with which he pushes out the outer door with remnants of the flyscreen on it. He goes down slowly on the stairs, taking one step at a time. He passes a rusty little bike. He fumbles with the garage door. He opens it with difficulty, pens it up fully, then goes for the other wing. He turns on the light, which vcan only produce  blind semi-darkness at best.He feels better next to the car, he puts his left hand on the indented, matted fender, above the rusty lamp-frame. He leans on the car, the dust just flies off it. Under the trace of his hands the remnants of the once black spraying. He opens the door, it obeys with a creak, though the sealing rubber visibly adhered to the door.  He touches the worn, faded steering wheel with one hand, the car’s door with the other, and sits down on the worn away seat. He strokes the cracked wheel , the chrome circle and the emblem in its middle. He reaches up, turns the visor down, the ignition key falls into his lap. He takes it up and puts it in the ignition slot.He stares a little in front of him , then turns the key. The self starter screams once, then there is silence. He waits a little, then tries again.He grinds and turns the engine a few times, it coughs a couple of times, gives out a huge bang, and then there is silence again. He is third time lucky, it coughs once or twice, shots back, then the great V8 mechanism revs up. As it warms up  it gets into the trustworthily humming light running, though this creaks rather with the half broken off exhaust pipe which has a hole in it. He turns on the radio and the sounds of „All I Have to Do is Dream” can be heard. The car gets the D-grade, the lamps light up, -with the exception of the right rear lamp , and out it goes of the garage already, on its semi-worn out and run down tyres. It goes slowly along the dusty earth road- dust flies through ists broken windscreen, then as it turns onto the main road the common, desperate yelling of the semi-dead sound muffling drum stops. The brilliant hub caps are encased in snow white frames by the beautiful, brand new tyres with  white inlay.There is no trace of dust on the black sheen. No worn out seats, rust or decay  can be seen anywhere, – an immaculate, old piece of iron with black spraying glides through the night with confidence. Behind the wheel is a man of forty to fifty years of age, who is handsome, and smiles in his nice black tuxedo, white shirt, a hat , and with a cigar in the corner of his mouth. He turns up the volume, and this time it is Ritchie Valens who belts out „La Bamba” into the world.  The man pulls the window down, and goes full steam ahead.  The Caddy of ’49 races into the starry pitch black night . The trembling light of the rear lights are still visible for a while, then these too, are swallowed by the darkness(…)”

One thought on “Dreams’ shop”