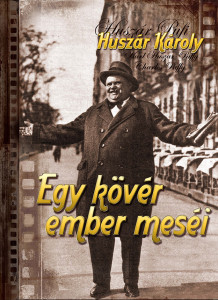 Memoirs of my relative, Charles Puffy, a former Hollywood movie star, his perception of Hollywood.
His autobiography in my re-edited version.

The tales of a fat man penned by Charles Puffy. He had several memorable adventures in the US at the time when silent films were all the sensation. Chaplin? Keaton and the likes were the stars of the silver screen in the evening. The moguls and film stars of his time were his friends., his receptions, held in the garden of his Hollywood mansion were widely known and very popular.  Few people can claim that his goulash burnt the mouth of Harold Lloyd, and that he poured black coffee on Adolf Zukor. Károly Huszár (Károly Hochstein), or Charles H. Puffy as he was known in the United States, was the great comedian of his time. This book gives us a glimpse behind the scenes of the Hollywood of the 1920’s, and also we get to know the theories of the famous layered cabbage and cottage cheese pasta á la Puffy.

I thought that the 70th anniversary of the death of my forgotten relative Charles Puffy, now is the time to intruduce this unjustly forgotten man again. and the self-published memoirs called The tales of a fat man written in Verőce (Hungary) in 1935 should be made available to all.

„(…) But finally one morning when I get up on the deck, masses of the famous skyscrapers are all around me. Small propellers rub themselves against our boat, about 50-60 people move up on the steps which hang down,  and in a minute or two I stand in the ring of photographers A man introduces himself and they tell me that my apartment at the Waldorf Astoria awaits me, he himself will take care of everything. These people are reporters from New York’s biggest newspapers, who were directed  by him to come and receive me, because he will be my manager in America. He put a written text in front of me that thirty three and one-third of all my income is his, but until he does get me a contract, he will pay me 300 dollars per week, and pay for all my expenses in addition. I signed the paper, then people started to take pictures. Pictures as I greet Ameriva and them. Pictures as I cry with joy that I arrived in America. As I throw away a bottle of brandy with contempt, and wave goodbye to alcohol, given that at that time there was alcohol prohibition in America. Pictures as I sleep n my cabin and pictures  as I say goodbye to the captain, and pictures in who knows how many other poses. After an hour of serious badgering I finally got off the boat. Of  course they took a picture of me as I stepped on American soil ,and after an hours spent at customs, I could finally go to the hotel. The whole thing gave me the idea that I was in a lunatic asylum no less.

When I arrived at Waldorf Astoria, which is the most elegant, finest and most expensive hotel in the entire United States, there were already papers with my pictures and my story in it, including the interviews conducted with me.I was dumbfounded by the unimportant silly stuff,  which I was supposed to have said. I apparently said that I had 30 huge suitcases, 300 shirts, 40 hats, 20 pajamas,  and I have this many because I am so fat that I  cannot get ready made clothes anywhere, only in that one European shop where I shop for clothes since my birth.— this, by the way, is true.  They said that this is excellent promotion, and contract offers will roll in.

I went to my hotel suite. And I waited. I did not ask the price, since I did not foot the bill. A valet wearing breeches served breakfast and lunch, I was happy to invite my poor friends in New York to the most sumptous feasts., so that they can also be part of my good life.And I wasn’t paying after all. .

My manager encouraged me to give huge tips, and that I should only eat delicious food, he will pay every cent. They hired a car for me which parked at the front of the hotel, and ordered  thatre boxes from the receptionist. Hundred tickets were booked in my name at a propaganda charity performance, so I lived like I had wished to live.

Everything went smoothly. I was surprised by this dizzying, quick success. I lived well, very well, and I started to understand why people say about America that is the world of food and abundance.This prosperous life was already going on for three years, and though contract offers  were yet to come-as my manager put it- this was only a question of days., and we will sign a thousand five hundred dollar contract. I was happy that for the first time in my life I will be on the right track.

I was happy, until on a not very nice day I was presented with the bill of the hotel, which included the prices for the apartment, the feasts, the 100 theatre tickets the cars, and the theatre boxes booked  for the charity event, to the sum of 1860 dollars

Never again could I find my manager anywhere. He disappeared, and like it or not I decided to pay half of my wealth two thousand dollars for three weeks. One of my neighbours at the Waldorf was Guggenheim the copper magnate. The other was Mr. Wrigley the bubble gum king. Both must have been very surprised, why the filthy rich European movie star chose to leave the hotel suite so  quickly. Perhaps he is used to even better. Well, these movie stars, are so well off, they don’t quite know what to do with themselves. That is what they have must have thought to themselves.

And I went, — no: I rushed off to a small room monthly rented on East side, and began a realistic, terribly hard battle for my success, my life, in a strange city , amomg strange people who spoke a foreign language.